Life with the Afterlife: 13 Truths I Learned about Ghosts by Amy Bruni 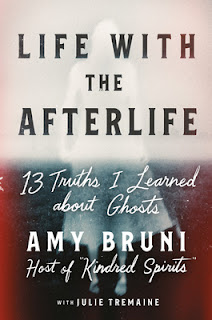 Book: Life with the Afterlife: 13 Truths I Learned about Ghosts

Synopsis: Ms. Bruni, who any fan recognizes from her work on Ghost Hunters (the original) and Kindred Spirits or even paranormal research conventions, brings thirteen lessons she learned about ghosts in her decades of ghost hunting. Chapters are done in sections based on paranormal research and her own experiences in ghost hunting. Ms. Bruni also throws in tidbits about the go behinds of the shows Ghost Hunters and Kindred Spirits, as well as personal accounts in Amy's life that fueled her passion for the field.

My opinion: This book captured my attention IMMEDIATELY. I enjoyed the format of weaving in paranormal research, show accounts and personal experience. In my humble opinion, it gave the book a bit more personality rather than straight research or straight personal account, which comes off to me as more "one man syndrome" vs. a respectable scientific source. To me, it made the book very warm, approachable and readable.

I have to say, personally, I enjoyed the "behind the scenes" of Ghost Hunters most. I absolutely loved the show Ghost Hunters and was obsessed with being at my television to watch it faithfully until the departure of Grant Wilson. I continued to watch it until about season 9 as I could, but really enjoyed Amy's involvement with the team as highly professional. Each year, Ghost Hunters Live achieved the same level of celebration as Chicago Bears Sofa Tailgating Sunday.

What I loved most of this book was Ms. Bruni's skepticism and criticism of the field, including some major names such as the Warrens (whom I have my own issues with) and not accepting findings as gospel. Her final chapter even addresses the topic of question everything and embrace skepticism, even from her. There was a sense of humility in that for me.

Would I recommend? Yep! How much did I enjoy this read? I read it in 2 days and a girl has gotta work! I would read this book before I went into work, after I went into work and even during my lunch hours. It was just a good, inviting reading that read quickly.