Death of a Nightingale by Lene Kaaberbol 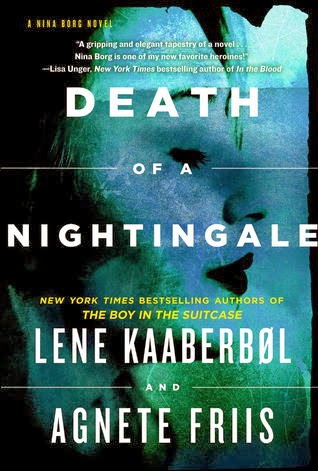 Synopsis: This storyline is pretty unique. I have copied from Goodreads to give an excellent synopsis of the book.

Nina. Natasha. Olga. Three women united by one terrifying secret. But only one of them has killed to keep it.


Natasha Doroshenko, a Ukrainian woman who has been convicted of the attempted murder of her Danish fiancé, escapes police custody on her way to an interrogation in Copenhagen's police headquarters. That night, the frozen, tortured body of Michael, the ex-fiancé, is found in a car, and the manhunt for Natasha escalates. It isn't the first time the young Ukrainian woman has lost a partner to violent ends: her first husband was also murdered, three years earlier in Kiev, and in the same manner: tortured to death in a car.

Danish Red Cross nurse Nina Borg has been following Natasha's case for several years now, since Natasha first took refuge at a crisis center where Nina works. Nina, who had tried to help Natasha leave her abusive fiancé more than once, just can't see the young Ukrainian mother as a vicious killer. But in her effort to protect Natasha's daughter and discover the truth, Nina realizes there is much she didn't know about this woman and her past. The mystery has long and bloody roots, going back to a terrible famine that devastated Stalinist Ukraine in 1934, when a ten-year-old girl with the voice of a nightingale sang her family into shallow graves.

My opinion: In my opinion this book started off much stronger than it finished. This definitely was not my favorite in the series, but not my least favorite either. I thought the topic was an interesting topic that the authors have chosen.

One criticism that is always discussed with this series and as I discussed this book with my peers showed up again in this book is that if Nina handled the main part of the mystery, it would be solved immediately. This tends to drive the hard core Nordic Noir readers that I interact with crazy enough to where some will no longer read this duos work.

Lena Kaaberbol continues to be a bit tame to the Nordic Noir authors that I like. When I am asked for recommendations, I put this duo in the same category as Camilla Lackberg.


Source: Soho Crime for review
Would I recommend? : As I stated above, I recommend this book to newbies to the Nordic Noir genre. They have a bit of an American mystery feeling. I will then transition them into deeper, darker Nordic Noir authors.

Stand Alone or Part of a Series: Number 3 in series
Posted by A book and a review at 9:35 AM