The Troop: A Novel of Terror by Nick Cutter 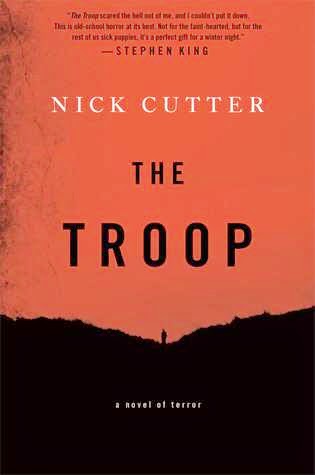 Book: The Troop: A Novel of Terror

Boy Scouts live by the motto “Be Prepared.” However, nothing can prepare this group of young boys and their scoutmaster for what they encounter on a small, deserted island, as they settle down for a weekend of campfires, merit badges, and survival lessons.

Everything changes when a haggard stranger in tattered clothing appears out of nowhere and collapses on the campers’ doorstep. Before the night is through, this stranger will end up infecting one of the troop’s own with a bioengineered horror that’s straight out of their worst nightmares. Now stranded on the island with no communication to the outside world, the troop learns to battle much more than the elements, as they are pitted against something nature never intended…and eventually each other.

My rating: I have chosen not to rate this book.

My opinion: I read The Troop as an ARC from the publisher. I am a fan of horror, but couldn't figure out why I didn't like this book.  As hard as I tried, I simply couldn't put my finger on it. It wasn't that the book was poorly written. In fact, this book is very well written. To give it a fair review, I decided to wait until it came out in print. When I was able, I grabbed the book to skim it and it became very clear to me why it didn't tickle my fancy.

This book reminded me of Dean Koontz' Moonlight Bay series. It was along the same lines...a biological/military experiment thriller run amok. While I read both the books in the series, I rated them 2/3 stars. I love thrillers, but more thrillers of killers and things that go bump in the night. The sci-fi thrillers technically don't do anything for me. It dawned on me that I felt the same way after finishing this book.

This book is not for the weak or faint of heart readers. It is pretty graphic, particularly with some pretty gross scenes. Shockingly, that didn't seem to bother me, but I do like to give warning.


Source: Publisher for review
Would I recommend? : I have to several people, including my husband.