Rising Out of Hatred: The Awakening of a Former White Nationalist by Eli Saslow 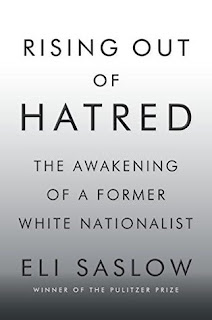 Book: Rising Out of Hatred: The Awakening of a Former White Nationalist

Synopsis: At the ripe old age of 19, Derek Black was already a leader in the White Nationalism movement. Then he went to college away from the influence of his parents and a whole new world opened to him. This is his story.

My Opinion: Overall, I would say this was a very good read. There were many aspects as to why it made an excellent read. It was interesting to see a man go through growth when put into a less insular setting and have to live with the consequences of his past choices. I felt the author chronicled that well, including Derek's changing relationships (particularly his father) as he went through these changes.

Overall, I felt the book was a 5 star read. Where I marked it down was due to the author's glaring bias against Conservatives. I had really wanted this to be a "just the facts, ma'am" type of read, but it wasn't. I found "tidbits" of bias added in where it wasn't necessary and brought absolutely nothing to the book. Standing on the outside, I was very sad with this. I thought the author brought a very important book into the market.

Do I still recommend the book? Hell yes! I recommend it to show that people can change. I recommend it to show that preconceived notions and judgement of others is often wrong and one needs to get to know a person individually BEFORE passing judgement on him/her. Something that in this age of "sheepish" heightened politics and Jim Jones' kool-aid drinking often doesn't occur and a person is judged by the way he/she votes versus the content of his/her character and awakenings during one's life for whatever the reason.