So things are a lil' bit different this week in A Book and A Review. I am participating in a book tour with Novel Publicity for Tricia Stewart Shiu's book "Moa".  There are giveaways with this so be sure to check them out!!﻿ 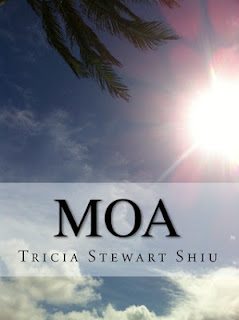 Eighteen-year-old, Hillary Hause’s left thumb searches frantically to turn on the “I’m Okay to Fly” hypnotherapy recording. Her nerves on edge, fuchsia fingernails press into the blue pleather armrests of her airplane seat.
“No spells can help you now,” she whispers to herself under her breath—then checks to see if anyone notices. Nope, they don’t.
The plane lifts through the early morning, gray fog of California, “June Gloom” giving way to the azure sky, and Hillary covers her curly brown head and retreats beneath the questionably clean plane blanket cranking the volume to drown out the drone of the engines.
“Outer shell close to breaking.” This time she doesn’t care if anyone hears.
I hover just beyond her “outer shell”—a movement in the periphery, a faintly familiar scent, a fond memory just beyond recognition, a non-human observer. Before the week is up, Hillary will save my life, as I will hers. But, for now, more about Hillary.
The drink cart rolls past the blanket, which has, by now become a moist steamy cave.

“Hey, freak. I hope your plane crashes.” The memory reverberates through her brain despite her attempts to distract herself with the hypnotherapy recording. She increases the volume, but the ugly conversation, which occurred just before school ended, still haunts her mind.
“I guess the only people they check on those flights are the suspicious ones,” Krystal Sykes, a bully from her home room, leans in as Hillary hastens to grab books for her next class. Krystal, also a senior, has hounded Hillary since the first day of freshman year and this is the final day during the final hour at this tiny high school of 376 students —where everyone knows everyone else’s business.
“Look, Krystal.” Hillary turns her eyes toward the sneering blonde. “It’s the last day of school, we’ll never see each other again. Can you give it a rest?” These are the most words the two young women have exchanged in the entire four years of high school.
A look of shock replaces Krystal’s smug snick, “Oh, so now you talk.” She leans in, so close that her spray tan becomes a patchy Impressionist painting. Her pores are blotched with cakey, two shades too dark powder, her unblended cream eyeshadow creases across the center of her lid and her tropical breeze flavored breath threatens to strangle the words right out of Hillary.
“I know all about your witchcraft practices and have made a few spells of my own. Trust me. You’ll never make it to your sister’s house in Hawaii.” Krystal’s backpack jingles and Hillary watches her spin around and skip down the hall.

Hillary is not a witch. She has, however, carefully crafted a “shell” to protect herself from bullies like Krystal—who, as far as Hillary can tell—is not a witch either. She has watched Krystal throughout elementary, middle and high school and has not been able to discern whether or not she practices witchcraft. No matter what Krystal’s background, her intent is to harm. And there is nothing worse than a spell with an aim to hurt. Hillary has had no choice but to remain in a constant state of defensiveness.
The twenty-minute recording ends and Hillary falls into a troubled sleep—feeling every bump and hearing every creak of the plane.
With about an hour left in the flight, Hillary awakens with a “turtle headache.” Hillary’s older sister Molly taught her this term which means a headache caused by sleeping too long underneath the covers of one’s bed.
Sadly, Molly lost her husband, Steve, last year in an unfortunate surfing accident. The throbbing pain in Hillary’s left temple could be the result of remaining submerged beneath an airplane blanket and wedged between the window and armrest, or it could be from worry about how Molly and her niece, Heidi are dealing with their devastating loss.
Disoriented, Hillary pokes her head out just in time to glimpse puffy clouds and sparkling sea below. A flood of excitement and sheer wonder flows through Hillary in the form of a tingle from her head to her toes. And then, a lovely thought: “…And for an Everlasting Roof, The Gambrels of the Sky…” She will enjoy this plane ride, thanks in part to Emily Dickinson.

As part of this special promotional extravaganza sponsored by Novel Publicity, the price of the Moa and Statue of Ku eBook editions have both been dropped to just 99 cents this week. What’s more, by purchasing either of these fantastic books at an incredibly low price, you can enter to win many awesome prizes. The prizes include $600 in Amazon gift cards, a Kindle Fire, and 5 autographed copies of each book.
All the info you need to win one of these amazing prizes is RIGHT HERE. Remember, winning is as easy as clicking a button or leaving a blog comment–easy to enter; easy to win!
To win the prizes:


About Moa: Eighteen-year-old, Hillary, anticipates adventure as she embarks for trip to Honolulu, but gets more than she bargained for when Moa, an ancient Hawaiian spirit, pays her an unexpected visit. Get it on Amazon.
About Statue of Ku: The second book in the Moa Book Series, “The Statue of Ku” follows Hillary and Moa as they jet to Egypt on the Prince’s private plane to reclaim Moa’s family heirloom, the inimitable statue of Ku. Get it on Amazon.
About the author: Tricia Stewart Shiu combines her addiction to the written word with her avid interest in the healing arts and all things metaphysical in her novels Moa and Statue of Ku and looks forward to finding new ways to unite her two loves. Visit Tricia on her website, Twitter, Facebook, or GoodReads.

My opinion: As I often do when I read Young Adult books, I put myself in the place of a young reader however, at the end, put my adult reviewer hat back on.

I found this book to be delightful. It was CLEAN in language and scenery.  It was a light, engaging story with enjoyable and heartwarming characters and it screamed adventure. In a period of time where  we have headed into dark, almost gothic storylines are the norm or at least permeating this genre. Moa was truly a breath of fresh air. On that note, I found this book to be appropriate for the 'tweens and early Young Adult genre. I think that "older" young adults would find it a bit too light.

Putting my adult reviewer hat back on, I did find that the author had almost "switched" narratives throughout the book. There were times where I felt it was appropriate, but there are times that it really didn't make sense to the storyline. In all honesty, I think with the age group who would be reviewing the book, they would miss it. It is just something to me as a reviewer that popped into my radar.

Would I recommend? : Yes, but only for the appropriate age group.

Stand Alone or Part of a Series: Part of series. I will be reviewing Statue of Ku (Moa #2) tomorrow.
Posted by A book and a review at 8:01 AM