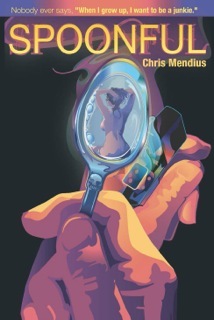 Synopsis: Michael Lair, an addict who doesn't know the meaning of an honest day's work, is always looking for the next petty crime to commit just to survive. The cast of characters he surrounds himself with don't exactly lend themselves to leading a boy scout life either. From the artist by day, stripper by night to his heroin partner who seeks out the petty crimes for Michael to partake in.

When Michael decides he wants to be on the selling side of the drug world and finds two Northwestern students naive to go into selling cocaine with him. As he starts to be successful, he decides to play the stockmarket. Could he be turning over a new leaf or is the worse yet to come?

My opinion: I could never quite warm up to this novel. Although the writing in the book was wonderful, I just really didn't enjoy the storyline nor ANY of the characters. Although, the storyline was pretty dark, I did enjoy the dark, sarcastic humor that went along with Michael's world.  I do have to admit that as a former addictions counselor, Mendius NAILED the scene. So, it is a relatively realistic read as to the "culture".

I think another issue that I had with this book is that the addictions world seems to be the "in topic" this year. I have read/reviewed roughly a dozen novels which surrounds this gritty world in this year alone. It is just my feeling that he didn't quite separate it from the multitudes of other books written on the same topic.

If you are offended by gratuitous language, sexual scenes or drug use, Spoonful IS NOT for you. As the culture itself, the book is laden with all 3 things.

Would I recommend? : Not unless someone specifically likes that genre.