Cut to the Bone (A Body Farm Novel) by Jefferson Bass 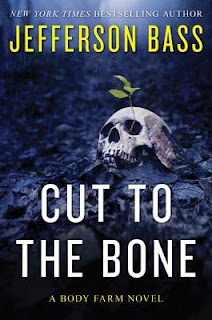 Book: Cut to the Bone (A Body Farm Novel)

Synopsis: In a prequel to the Body Farm series, it is 1992 and the Body Farm is just getting started when Dr. Brockton is called in to investigate a serial killer with a very unusual blood thirst. As the killer remains elusive and the body count rises, is Dr. Brockton on this killer's radar?

My rating: 5 stars easily without even coming up for a breath!

My opinion: OK...gotta preface this review with saying I am a HUGE fan of the writing duo of Jefferson Bass. Not quite an Annie Wilkes level of fan, but pretty dang close. I was hooked with the first book in the series and have just gotten more sucked in with each new release.

Cut to the Bone is no different. Incredibly strong writing skills partnered with dynamic, personable characters and a rockin', twisted storyline make this a not-to-be missed read. 'Nuf said on that front. I can't say it any stronger! This one was told in multiple points of view which did make it maybe a bit difficult to follow, at times,  but not enough to detract from the storyline or the rating.

I will say that there was a bit more graphic violence to this book than was in earlier releases. When I say this, I say scenes that made me cringe and I tend to have a tough stomach on this stuff. I also found myself reflecting much more on occurrences in this book than I have in other books in the series.

Miranda was missing in this novel. I must admit that I missed the banter between her and Dr. Brockton. As a result, this one was much more of a "serious thriller" to me.

What made this book a particular treat for me is that I just finished listening to the duo's book, Death's Acre: Inside the Legendary Forensics Lab.... It was amazing to see how many very specific "incidents" from there was brought into the Body Farm series.

On a final note, unlike the rest in the series, this is considered a prequel. In my humble opinion, it would be a great place to either start the series or to read as a stand alone.


Source:  WilliamMorrow for review
Would I recommend? : Heck yes and have steered many a new fan to this dynamic duo.

Stand Alone or Part of a Series: Part of Series: Prequel in series