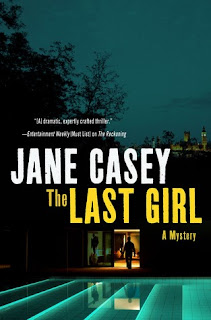 Synopsis: Tragedy strikes the family when wealthy, connected London attorney Philip Kennford when his wife and "prized" daughter are murdered in the most vicious manner. His "not so prized" daughter, Lydia is spared with no injuries. Who holds such a grudge against this "not so" Father of the Year that they would take it out on his family? Has he irritated the wrong client or is it closer to home? It is up to Maeve and the rest of the team to unravel this lawyer's unscrupulous secrets.

My opinion: I must admit that the first two books in this series were pretty predictable, but I enjoyed the ride getting there. I thought this one was going the same way until Ms. Casey included a twist at the end that was AWESOME! I didn't see it coming.

As usual, Ms. Casey does an excellent job weaving the storyline and building up the characters. She also threw in a couple of smaller twists before leading to the big one. The book flowed quickly and I found it difficult to put down.


Source: Library/St. Martin's Press
Would I recommend? : Yes, read the series though.

Stand Alone or Part of a Series: Part of series
Posted by A book and a review at 7:35 AM