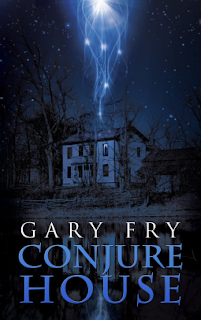 The village of Deepvale has a sinister past. Built in the 1400s, it has been home to a number of sordid characters, including Peter Suman, known locally as 'The Conjurer' due to the diabolical experiments he was rumored to have conducted during the 19th Century, in a dark old house beside a lake.

In the 1990s, after a bet with his elder brother and three friends, seven-year-old Simon Mallinson goes missing inside the now derelict Conjurer's House.

Fifteen years later, his brother Anthony is back in Deepvale, following the brutal deaths of his parents. And strange events have begun to occur in the village again, including the apparent return of young Simon and his creepy new friends. Worse still, Peter Suman appears to be back, too, bent on achieving what he failed to do over a hundred years earlier…

My opinion: I must admit that I found this novella to be slow moving and not very scary...even the parts that were supposed to be. As a result, it was difficult in keeping my attention. I expected more from this book (I was thinking the movie Poltergeist) than what was delivered.


Source:   Darkfuse Publishing for Review
Would I recommend? : Nah, which is very rare given the publisher.