To Be a Friend is Fatal: The Fight to Save the Iraqis America Left Behind by Kirk W. Johnson 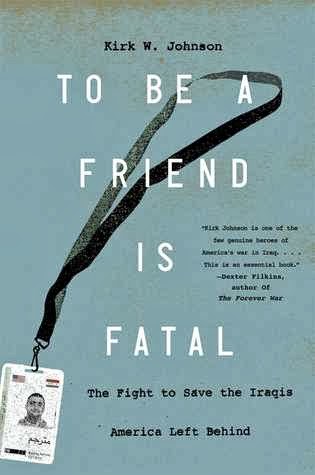 Book: To Be a Friend is Fatal: The Fight to Save the Iraqis America Left Behind


In January 2005 Kirk Johnson, then twenty-four, arrived in Baghdad as USAID’s only Arabic-speaking American employee. Despite his opposition to the war, Johnson felt called to civic duty and wanted to help rebuild Iraq.

Appointed as USAID’s first reconstruction coordinator in Fallujah, he traversed the city’s IED-strewn streets, working alongside idealistic Iraqi translators—young men and women sick of Saddam, filled with Hollywood slang, and enchanted by the idea of a peaceful, democratic Iraq. It was not to be. As sectarian violence escalated, Iraqis employed by the US coalition found themselves subject to a campaign of kidnapping, torture, and assassination.

On his first brief vacation, Johnson, swept into what doctors later described as a “fugue state,” crawled onto the ledge outside his hotel window and plunged off. He would spend the next year in an abyss of depression, surgery, and PTSD—crushed by having failed in Iraq.

One day, Johnson received an email from an Iraqi friend, Yaghdan: People are trying to kill me and I need your help. After being identified by a militiaman, Yaghdan had emerged from his house to find the severed head of a dog and a death threat. That email launched Johnson’s now seven-year mission to get help from the US government for Yaghdan and thousands of abandoned Iraqis like him. The List Project has helped more than 1,500 Iraqis find refuge in America. To Be a Friend Is Fatal is Kirk W. Johnson’s unforgettable portrait of the human rubble of war and his efforts to redeem a shameful chapter of American history

My opinion: In my opinion, this book needed to be written and Mr. Johnson did an excellent job in describing how our government really-for lack of a better term- screws over foreigners who assist them. We constantly see examples of this from the examples given in this book to the Pakistani physician who informed us of Bin Laden's whereabouts. His thanks from our government...imprisonment in a Pakistani prison with no American rescue.

I must admit that one of the things that most impressed me in this book was that the author was able to keep it non-political. Most of the books like this are so heavily biased that I end up ripping it apart in review. However, Mr. Johnson holds both the Bush and Obama administrations who are BOTH guilty of doing this, accountable . It was refreshing that the author didn't come in with an agenda, but kept to shining a light on the injustice and abandonment of those who help us when we need them the most and our abandonment when they need us.

To boot, I was excited because I know of the author's father, as well as where Yaghdan found employment, so that was an extra little surprise in the book.

Would I recommend? : I have many a time.

Stand Alone or Part of a Series: Stand alone
Posted by A book and a review at 6:13 AM