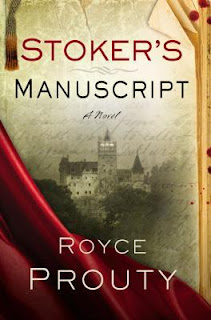 Synopsis: Joseph Barkeley, a rare manuscript evaluator, is called in to evaluate and purchase the original manuscript of Bram Stoker's Dracula for a reclusive buyer who lives in Romania. He will then deliver it to the buyer.

Barkeley, who happens to be from an orphanage in Romania, must come to terms with his past when he is held hostage by the son of Vlad Dracula, the purchaser of the mysterious manuscript and won't be released until he deciphers hidden messages from the Dracula family line.

My opinion: This book had so much potential and fell so flat. It is probably the first time I have had a "WTH am I reading?" moment this bad this year. I have to be honest in saying that if I was not reading this book for review, it would have been returned...unfinished.

This book started off incredibly strong and I was hooked. About midway, it took the goofiest turn that just had the book collapse. The book in the beginning was intense, creepy and spine-tingling.  I thought "Yep, I could see this happening and I would be looking for the "nearest exit." Then, the author chose to go down a path that was SO bizarre that I felt like he was trying to crash the book into a wall.

If this book is based off a true story, I would like to know what the story was because it was probably better than what the author had written.

Would I recommend? : Absolutely not! But let me throw in that lovers of vampire stories may like this book.

Stand Alone or Part of a Series: Stand Alone
Posted by A book and a review at 3:54 AM