The Homecoming: A Novel by Carsten Stroud 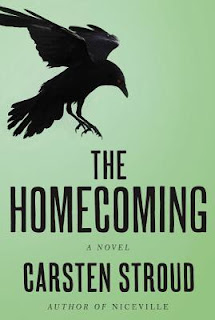 
When two plane crashes set off a spellbinding chain reaction of murder, inadvertent kidnapping, corporate corruption, and financial double-dealing, it’s not enough that Niceville detective Nick Kavanaugh (ex–Special Forces) has to investigate. He and his wife, family lawyer Kate, have also just taken in brutally orphaned Rainey Teague. Something bothers Nick about Rainey—and it isn’t just that the woman in charge of attendance at Rainey’s prep school has disappeared. In fact, people have long been disappearing from seemingly placid Niceville, including, most disturbingly, Kate’s father. Using his files, Kate and Nick start to unearth Niceville’s blood stained history, but something (or is it Nothing?) stands in their way.

My rating: Not being given

Two reviewers who had reviewed this book AND read the first book, Niceville, gave it an enthusiastic 5 stars and "SQUEES".  They did make very strong points that this book was a continuation of the first book.

I will say that I did love the deep depiction of the characters in this book. It almost felt that one was in the room looking in at what was occurring, BUT I felt like I had walked into a play after intermission.

On that note: I will be reading Niceville when I have a break in my reading lists and then rereading/rating this one. I didn't feel it was fair to hold off in my review though.


Source:  Edelweiss for Knopf
Would I recommend? : See above. If you read this read first in series, Niceville, first.

Stand Alone or Part of a Series: Part of series
Posted by A book and a review at 3:48 PM