The Impersonator by Mary Miley 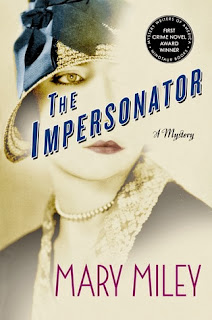 Synopsis: In 1917, Jessie Carr, a 14 year old heiress to a fortune, disappears off the face of the earth. Did she run away or did something much more sinister happen to her?

Seven years later, her uncle, Oliver,  thinks he has found his answer when he sees a vaudville actress on stage who is Jesse's dead ringer. Problem is...it isn't her.  It is a young woman, Leah, who has been alone since the age of 12. Oliver comes up with a great idea that will allow him to take hold of Jesse's fortune. He will have Leah impersonate Jessie. There are some who aren't happy to see Jesse back though.

My opinion: Ms. Miley offers a stunning example of why I love the freshness of debut authors so much.

The storyline in this book was so unique, well developed and intriguing. Given the time period that the book is set in, one can actually see this occurring and have been offered times in history when it has occurred. Ms. Miley includes the famous weaved into her storyline which was thrilling. It was just a fun, fun read!

Gotta admit that the ending left me in surprise, which is always a nice thing for me. Not necessarily a book with a lot of twists, per se, but a well developed plot that didn't release too much too soon.


Source:  Publisher for review
Would I recommend? : Already have

Stand Alone or Part of a Series: Stand alone