The Book of Killowen by Erin Hart (Nora Gavin #4) 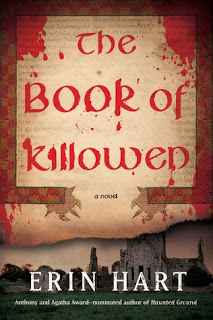 
Synopsis: This book was so different that I am choosing to copy the description from Goodreads to capture everything this book entails!


An ancient volume of philosophical heresy provides a motive for murder in this haunting, lyrical novel of forensics, archeology, and history—the fourth in an acclaimed suspense series.

What sort of book is worth a man’s life? After a year away from working in the field, archaeologist Cormac Maguire and pathologist Nora Gavin are back in the bogs, investigating a ninth-century body found buried in the trunk of a car. They discover that the ancient corpse is not alone—pinned beneath it is the body of Benedict Kavanagh, missing for mere months and familiar to television viewers as a philosopher who enjoyed destroying his opponents in debate. Both men were viciously murdered, but centuries apart—so how did they end up buried together in the bog?

While on the case, Cormac and Nora lodge at Killowen, a nearby artists’ colony, organic farm, and sanctuary for eccentric souls. Digging deeper into the older crime, they become entangled in high-stakes intrigue encompassing Kavanagh’s death while surrounded by suspects in his ghastly murder. It seems that everyone at Killowen has some secret to protect. Set in modern-day Ireland, The Book of Killowen reveals a new twist on the power of language—and on the eternal mysteries of good and evil.

My opinion: One of the reasons I love reviewing books is that I am introduced to new authors and series. Ms. Hart's Nora Gavin series is a prime example of this. I found this series to be incredibly inviting, smart and well written. Readers who love the works of Jefferson Bass and Elly Griffiths will find welcoming arms in the Nora Gavin series.

I did find that Ms. Hart is very character driven in this series, so I did find that there were some very significant lapses in my knowledge of the characters' "past".  Those will be filled in when I go back and start the series from the beginning.

Source:   Edelweiss for Publisher
Would I recommend? : Most definitely. Do yourself a favor and start with the first book in the series.