The Marriage Mistake (Marriage to a Billionaire #3) by Jennifer Probst 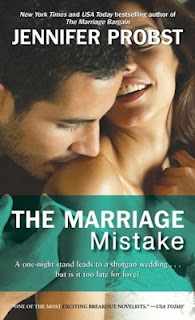 Book: The Marriage Mistake (Marriage to a Billionaire #3)

Synopsis: Max Gray runs a large bakery/company and his best friend and partner's sister, Carina, who has come to work at the company after earning her MBA. Gray knows that Carina whom he has known since she was a young girl is hands off, but when the two go to Vegas for a business deal, Gray is able to keep his lust in check and the two have a one night stand. Problem is Carina's mother has found out and is now forcing the two to get married.

My opinion: Call me old fashioned, but I really like simple romances that are sweet, clean and based more on a blossoming love than what The Marriage Mistake was. I would sum this book up more as being an erotica book vs. a romance.

Second, I find the premise of the book totally eye rolling. Mama forces Catina and Max to marry. I think had it not have been a simple lust book and it would have been that these two were trying to emotionally getting to know each other and fall in love...I would have been a bit more accepting, but this had nothing to do with the story.

I either really like romances or really hate them. I just found this one to be really superficial and weak and needing to focus on sex to prop up a pretty weak storyline.


Source: Netgalley for Publisher
Would I recommend? : Like erotica? I would. Otherwise, no.