The Trajectory of Dreams by Nicole Wolverton 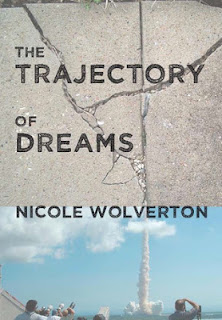 Book: The Trajectory of Dreams

Synopsis: Lela White, a sociopath in training, who is also a sleep lab technician has an obsession. That obsession is the United States space program. Her obsession started as a 10 year old girl, when her mother, with delusions of her own, admits that she was behind the Challenger explosion. Now, Lela thinks it is her job to make sure that the astronauts are sleeping well to avoid any accidents. If they aren't, she has her own resolutions to the issues.  The only way a sleep technician can assess sleep issues, though, are to study their subjects while they are sleeping. Forget the fact that they are sleeping in their own beds.

Lela has another problem and that is her perky co-worker. Lela dreams of ways to injure or even kill this co-worker.

When a Russian astronaut, on loan to the US space program, falls for Lela, will he make it out alive or does she have her own set of plans for him?

My opinion: I think this would definitely be my winner of the 2012 Most Unusual Book I read and not in a good way.

This book was one of those books, while not scary, is just downright creepy. Ms. Wolverton takes the story of a sociopath, probably on her way to being a female serial killer, and twists it into what people fear the most...being stalked when they are at their most vulnerable...while they are sleeping.

Furthermore, we are given insight into the main characters thought processes. A main character who smiles on the outside, yet has deep twisted conversations of what she would like to do to a person inside her head.  This book was such a mind-player. It really gave pause for thought as does one really know what another person is thinking. The book jacket description just doesn't give it credit as to the "twisted-ness" written inside its' pages.

To boot, we are presented with a well written book that could have been a bit tighter written, but still well written.  There is a reviewer on Goodreads who I think summed up this book beautifully in one word. That word...COMPLEX!


Source: Author for Review
Would I recommend? : Yes

Stand Alone or Part of a Series: Stand Alone
Posted by A book and a review at 12:24 PM