Battleship: The Story of a Champion 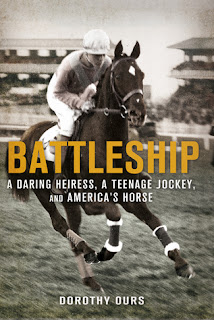 Book: Battleship: The Story of a Champion

Synopsis: Battleship is the story of three individuals who overcome adversity to accomplish greatness. Setting is 1938...Marion DuPont, of the DuPont family, denied a corporate position role in her family's company and pressures to enter as a debutante simply due to her sex. Then there was Bruce Hobbs, a 17 year old, tiny young man whose father could be abusive and demanding. Lastly, Battleship, tiny like Bruce, had to prove that he could  go toe to toe with the larger horses in one of the most grueling horse races known...The Grand National Steeplechase (aka Suicide Alley).

My opinion: Another unique offering from St. Martin's Press.

First, I must admit that I absolutely LOVE stories like Battleship. Stories of underdogs who prove everyone wrong to make big things happen in history. That sums up Battleship. It was truly a great book that had me on edge for the entire ride and had me sucked in very early into the read even though I am not into horse-racing nor the lives of America's wealthy. Ms. Ours wrote characters so strong, inviting and approachable that I couldn't help but cheer for all three "characters".

Second, it was very clear that Ms. Ours did her research in writing this book. She not only knew the story of Battleship, but the period of time inside and out. As a result, readers are painted a very vivid picture of not only the occurrences surrounding the story but in that period of time in the US as well.

So, why the 4 stars instead of 5? There was NOT one picture of the individuals nor the horse associated with this story. I can't believe there wouldn't be one picture in existence given the "cast" of characters or the incidents. Now, I did have an ebook ARC, but still if there were pictures in the book, they should have shown up on my Nook.  Call me silly, but I was so drawn to this story that I wanted to put faces to names or see the sites described in the book. That would have made my reading experience complete.

Would I recommend? : Very much so.  It was really a cool read. I can see it being made into a movie.