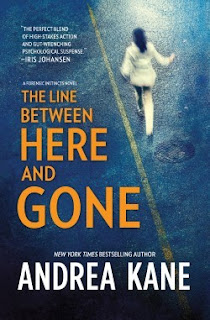 Book: The Line Between Here and Gone

Synopsis: Amanda Gleason's boyfriend, Paul, and father to her critically ill son, Justi,n was murdered before he had a chance to get to know or save his son. Was he truly murdered though?? Forensic Instincts is on the case when one of Amanda's friends captures a photo of Paul in Washington DC. If this is the case, what would make Paul up and disappear and go to the extremes of faking his own death.

My opinion: Hands down, this is my least favorite Andrea Kane book. I found the writing, storyline and characters in this book to be weak and not up to her standard of writing. The book almost had the feeling to me as though it was "pushed out" quickly. Ms. Kane used sex scenes in the book which I thought were oddly placed. It almost came off as "propping" up the book.

I also thought a chunk of the book was predictable and wrapped up too sweetly. I mean this with a level of sarcasm.

I definitely thought the first book in the series,  The Girl Who Disappeared Twice, more than this one. I am hoping that this is simply a fluke in the series.

Would I recommend? : No, although Andrea Kane fans may want to read it because it is second in the series.

Stand Alone or Part of a Series:  Part of Series
Posted by A book and a review at 3:00 AM