A Book Review and an Interview: Bootlicker by Steve Piacente 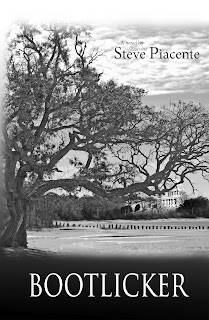 Synopsis: Dan Patragno, a newspaper reporter, is called in to write a story about a murder-suicide of a man and his infant daughter. What does this tragic event have to do with another tragic event in the woods of racially segregated 1959 South Carolina when a young black man is given a choice of helping a white corrupt politician get the black vote or be lynched?

My opinion: Steve Piacente is a dynamic writer. His books are fast paced and engrossing. His book, Bella, was a "can't put it down" for me and Bootlicker was the same way, reading it in a 3 hour sitting. Piacente writes incredibly strong characters and weaves captivating, deep storylines with a mystery that hooks the reader from page one.

I took half a star off my rating for the book because the book was written phonetically. Until I contacted the author, I had really thought that the book didn't have editing that would have been out of character for what I had read previously by this author. In my opinion, I would have liked to have seen an author's note or something like that explaining this. For me, it caused a lot of distraction which impacted my reading because it was confused with grammarical errors. I think with an author's note, this would have been prevented.

Would I recommend? : Of course!

Stand Alone or Part of a Series: Part of a series

SP: Thanks, Naomi. In the first novel, Bella enlists the help of a seasoned journalist named Dan Patragno to help uncover the truth about her husband’s mysterious death on an Afghan battlefield. Along the way, the alluring widow and unhappily married reporter learn about the power of temptation and the futility of revenge. (I’m thrilled that Bella just won the Readers Favorite 2012 Gold Medal for Dramatic Fiction). Bootlicker, meanwhile, features Dan as a much younger reporter assigned to cover a racially charged election down South. He learns of a horrific crime dating back decades that links the state’s racist U.S. senator and the man about to become South Carolina’s first black congressman since the Civil War. Dan breaks the story of this unholy alliance right before Election Day. Readers of Bella will recognize the traits – both good and bad – that Dan exhibits in Bootlicker and which will eventually lead to his success and failure as a journalist and a husband a decade or so later.


NB: What made you come up with the character of Dan Patragno? How much of him is based off your past as a reporter? How much of your career in Washington, DC is woven into the character?
SP: The cliché is to write what you know. I know journalism, Washington, and a little about relationships, all of which come into play in both novels. I’m also a New Yorker who somehow wound up writing for Southern newspapers for 25 years, including 10 years as Washington correspondent for the Charleston, S.C. paper. Finally, I teach journalism classes at my alma mater, American University in Washington, D.C. All that said, let me state for the record that I never made the reckless choices that Dan makes as he chases stories and women. I like to think that Dan is a convenient character through which readers can learn, think about and discuss big issues like marriage, happiness, and personal accountability.


NB: You use slang and phonetic spellings in many of the exchanges between the characters. There are mixed views on that device. What was your goal there? Were you worried about distracting readers?
SP: In a word, I was after authenticity. To me, conversations between Southern characters without drawl, slang, and regional witticisms would be like ordering frozen pizza while visiting Rome. Of course this can be overdone, so I tried to be selective, and place these remarks in the mouths of characters who wear their Southern heritage with the most pride, like Senator McCauley.


NB: This book is SO different but just as good as Bella. Most authors don’t do such a drastic change in the settings of their books yet you did, what made you do that? Were you nervous with what a hit Bella was?
SP: First, thanks for the kind words about Bella. I’ll answer by saying that I’ve come to believe that to understand why things are the way they are, you need to go back and understand the beginning. So it is with Dan, who I describe as successfully flawed. How could such a talented, promising journalist fall into such obvious traps? It has to do with his values, his mentors and his instincts. I don’t find the change of setting drastic; I see it as peeling back Dan’s story a little further, and back-briefing readers on how he honed his craft and earned his coveted post in Bella as a Washington correspondent. Clearly, he is not perfect. Who is? I’m hoping that readers will find Dan (and perhaps other flawed individuals in their lives) worthy of forgiveness and a second chance.


NB: Will we be seeing more in the series?
SP: Bootlicker resolves many questions, but one that’s left outstanding concerns the fate of Senator McCauley. I’m giving thought to a third novel that would answer the question about McCauley and perhaps give Dan a chance to resurrect his career, which is in tatters at the end of Bella. Bottom line: I hope you’ll stay tuned!