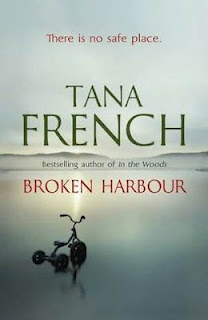 Synopsis: Patrick Spain and his two children are stabbed to death in their home while his wife clings to life after barely surviving the same fate. What would cause someone to murder an entire family including children? How does it involve Mr. Spain's career that made him a wealthy man? Or does it? Mick Kennedy and his new partner, Richie Curran are brought in to solve this heartbreaking crime. Will they get the right person though?

My opinion: My absolute favorite Tana French novel to date. This is an author who I have read all her works in this series, but could never really get into the works. I thought they were written somewhat dryly and I frequently would find my mind wandering. Although, this was somewhat present with this novel, I found myself mesmerized by this story.

Furthermore, I loved the twists Ms. French wrote into this storyline. As I reached the end, the final twist left me hanging my head due to the sadness. That is all I can write without heading into spoilerland.

On a side note, I had recieved this book as an epub file from the publisher. I must say that I found the file distracting and didn't like the way it read on my Nook. I waited for the book to be released in print and reviewed from there.

On a final note, I think Mickey Kennedy is probably my least favorite series character. I found the family dramatics really distracted from a strong storyline. Luckily though, Ms. French's series novels, at least this series, are written where the books can either be read in a series or as stand alones without feeling as though the reader is missing out on too much information.