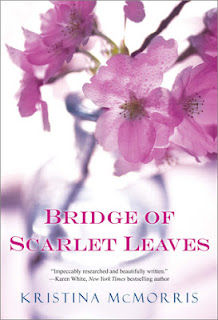 Synopsis: It is on the brink of WWII in California and violinist Maddie has fallen in love with Lane, a her brother, TJ's best friend. When Pearl Harbor occurs and FDR secures the imprisonment of Japanese Americans in internment camps, Lane and Maddie marry. TJ is sent off to war, while Lane is sent off to the internment camp. Maddie chooses to follow him and live in the concentration camp like setting. Like many Japanese Americans, Lane, trying to prove his loyalty to a country that has turned their backs on them, enlists in the army to defend his homeland.

Will Lane give everything to prove that he is a true American?

My opinion: As the imprisonment and the government sanctioned theft of Japanese Americans possessions has been of great interest for me as long as I can remember. Very few fictional books have been written on this subject and the majority of books I have read have been non-fiction and/or memoirs.

Ms. McMorris has a gift at presenting historical fiction set during WWII with characters who invite you in to their world and inner most thoughts. She gives a history that has very clearly been researched into the cultural norms of Americans, which are incredibly important as to the behaviors that occurred during that period of time.

Although, I continue to do research in the topic of the internment camps, I did learn from this book on things that happened within the camps.


Source: Author for Sisterhood of the Traveling Book Review
Would I recommend? : Yes