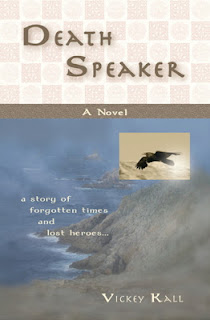 Synopsis: Emyn, a young Celtic woman with the gift of speaking to ghosts (Death Speaker), is growing up in the territory we now know as France during the time of Caesar's conquests. With warnings and directions from dead kings, can Emyn warn the Druids of Caesar's plans to save them? Will they take her seriously or laugh her off to their own detriment?

My opinion: The writing in this debut novel was spectacular. There was some repetitions of certain words, such as "hissed" among others that I found particularly annoying. There were also moments that I felt the story could have been tightened up, but the issue was nowhere near what I have seen in  other debut authors or even some experienced novelists.

I must admit that I did have sort of a hard time with the storyline, in regards to the superstitions/thoughts of the characters that I found it slightly difficult to get past. It was critical to the storyline and to that period of time though. What also fed into this was that there were moments of melodramatics that was even above the top, for the storyline. Again, normal for the period of time that the story was written, but it did have me roll my eyes a little bit.

I must make a note that this book is probably one of the best researched novels that I have read in a very long time (and the reason it was bumped up to a 4 star). It was very clear from the setting and down to the names of the characters that Ms. Kall had done her due diligence in the research area.

On a final note, on the jacket cover, this piece of work was compared to the works of George RR Martin's Game of Thrones; however, I would not say this at all. If I had to compare, which is something I despise doing, I would more compare this novel to an earlier, less polished style of the writing of Diane Gabaldon, author of the Outlander series.

ETA (1/20/13): As I posted my review on Amazon today, I noticed that this author REVIEWED HER OWN WORK under her real name. Death Speaker is written under a pseudonym. Nothing screams as being ethically challenged as presenting a false review to unsuspecting customers who depend on reviews to purchase their books. A note is on her review, as well as Amazon.com being informed of this infraction. Since informing Amazon of this, Amazon has removed the author's review written in her real name.


Source: Author for Review
Would I recommend? : No, I would no longer recommend this author. Any one who follows this book blog is aware that I am an avid supporter of the Indie movement. Indie authors are constantly given flack and treated as "lesser than" while I can attest as reading novels by both traditionally published and indie published authors that this is not the case. I have read numerous Indie authors who can compete toe to toe and come out ahead of traditionally published authors. While most Indie authors are scrupulous in their ethics, they are forced to fight against the stigma when author's such as Ms. Kall choose unethical methods to "review" her books.


Stand Alone or Part of a Series: Stand Alone
Posted by A book and a review at 5:01 AM