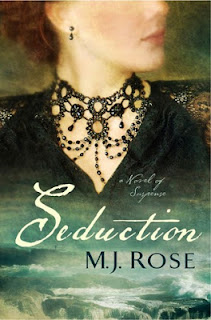 Book: Seduction: A Novel of Suspense  (The Reincarnationist #5)

Synopsis: In 1855 Isle of Jersey, author Victor Hugo, still reeling from the loss of his 19 year old daughter 10 years earlier, seeks out mediums to conduct seances. He is able to speak with numerous significant thinkers from history. When Hugo brings the Devil out in one of the seances, he encourages Hugo to commit an act that changes the game.

Present day, Jac L'etoile, heads to Jersey to recover from negative incidents in her life and assist a friend going through his own trials and tribulations. As they search deeper, they determine that there is a common character in this story's timeline and it goes back deeper in history than Jac or Theo ever thought.

My opinion: The Reincarnationist series is one of my favorite series. I have said before that Ms. Rose is a master of writing within multiple genres including very light horror. I think the author disagreed with me on this, but this series is what I talk about when I say that. I don't feel that this book classifies as a thriller. The breadth of what Seduction is deeper than your everday thriller and presents itself as chilling down to the spine.

Seduction has an eeriness to it that goes beneath the surface writing of this book. Ms. Rose has such a talent for weaving a story that is comparable to some classics that I  have read.  I was reminded of Rebecca by Daphne Du Maurier.  In addition and almost more importantly, as in all Ms. Rose's works, the characters are laid out well and written with a vivid picture.

I am working through the first books in the series, but I would say that this one depended much more on character revelation in the first works in the series more than I would have said it in other books later in the series. Jac is a complicated character and she requires a deep understanding on garnered through reading the beginnings of the series.

One other point that I would like to make in my review. There are a couple of books that do not convert to ebooks well. This is one of those books. In my opinion, there was some of the deepness to the novel that I think was missed in the ebook format. Give yourself an extra treat and splurge for the print version of this book. I rarely recommend this, but on this one, it is worth it.

Stand Alone or Part of a Series: Part of Series
Posted by A book and a review at 2:00 PM