The Shadow Man by Mark Murphy 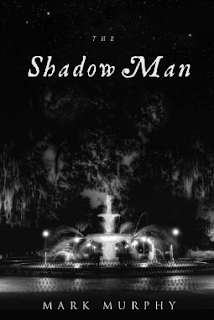 Synopsis: Surgeon Malcolm King leads a pretty typical life with work, loving wife, daughter and a old dog named Daisy. Pretty boring, but comfortable until he gets into a fender bender returning from a trip to Florida. Then things turn really strange . A Shadow Man always just on the outside of his vision, a neighbor's dog killed in a pretty vicious manner and two adversaries of Malcolm's turn dead. Not just dead...slaughtered with Malcolm now the chief suspect. Malcolm isn't a killer! Or is he? Can a Seminole tracker, Billy Littlebear, help Malcolm clear his name or will he confirm Malcolm's guilt as a merciless killer?

My opinion: I loved this atmospheric novel set in Savannah, Georgia (one of my favorite places). The story was fast paced and well written, particularly for its status as a debut. I must admit that it did have periods where it felt overwritten and "drama" central. There were also sections of the story that just didn't seem plausible.  It was still a fun read and Dr. Murphy is definitely an author that I would read again.

On a side note, I started this book as a ebook, but finished it as a print copy. The galley which was sent had several formatting issues which did not convert well to my Nook and made the experience less than desirable. Just something to keep in mind.


Source:  Netgalley for Langden Street Press
Would I recommend? : Yes