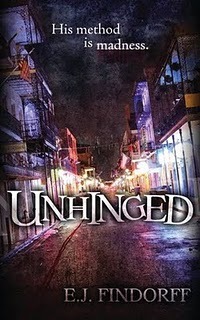 Synopsis:Detectives Decland "Deck" Dupree, a new detective, and his partner, Ron Lacey, a "crotchety" experienced detective who has become quite cynical in his years on the force, have been called to a murder scene of a murder of a woman from the red light district of NOLA. They then find a second victim, a gay man who lives down the hall from the first victim, of the killer dubbed The Absinthe Killer due to empty bottles of the wicked spirit found at the scene. What is scariest of all? Not only that the victims were mutilated in ways not appropriate to describe in this book review, but the woman was Deck's first childhood kiss! As more murders rack up, each with some tie to Deck, and some poor, unsuspecting gay man, he is desperate to find who is at the end of these slaughters. However, there are those out there that don't want him to succeed.

My opinion: I absolutely love the movies Tightrope staring Clint Eastwood and 8 mm starring Nicolas Cage. Unhinged struck me as a cross between the two. I have always had an affection for twisted books and seek them out when I need to satisfy my darker inner child. Normally, this affection is satisfied through my love of Nordic Noir books, as I find few American authors can go into the very dark and deep crevices of the mind where these thoughts hide. Mr. Findorff has found that spot and come out with a book so twisted, so scary that it leaves one holding their breath as to where the story line will take them.  To boot, some of the scenes are so twisted with a killer so convoluted in his thinking that one looks around to make sure they are alone.

One other thing I loved about this book was the sarcasm of Detective Ron Lacey and those around him. Mr. Findorff really nailed the sarcasm that even with cringing at the savagery of the killer had me snickering at some of the comments made by the detective. Also, the imperfection of the characters. Again, totally politically incorrect, but still a hoot!

One thing that did drive me crazy regarding this book and the reason it will be dropped to 4 stars vs. raised to 5 stars is due to the formatting of the ebook. It looks like it can be how the author wrote the book and I found it very distracting at times. I don't know if that is present in the print version of this book, but it appeared just way too choppy for my likings!I was also able to see what other reviewers meant by leaving loose strings. I must admit that it didn't change my perception of the book that much.

WARNING: If you are easily offended by gratuitous violence, sex and language...THIS BOOK IS NOT FOR YOU!! If like me, you aren't bothered, jump in...the water is warm and tinged red!


Source:  Downloaded for free
Would I recommend? : See Warning

Stand Alone or Part of a Series: Stand Alone
Posted by A book and a review at 11:03 AM