Cat vs. Dog or Aby's Story

I am doing something a little bit different today. I am participating in a blog hop being hosted by Terri G. Long and David M. Brown to celebrate David's new release "Man vs. Cat". Being an absolute animal lover and seeing the parameters of this hop, I knew I had to tell the story of how our kitty, Aby came to join the Blackburn home. If you like Aby's story or are an animal lover like me, be sure to click on the "flyer" for the hop down below. There are various other bloggers participating with their own stories!


In 2000, I was working for a nursing home, when my boss, who lived in the Humboldt Park area of Chicago, approached me. Now, Mary Anne was a cat lover. I always pictured her as being the cat lady of her neighborhood with her having 13 cats in her not so large of a home, but, I digress, Mary Anne approached me with looking for a home for 2 kittens, more than likely, a brother and sister, who had been dumped in this less than nice, crime ridden neighborhood and wandered into her backyard one day. She really didn’t want to add more to her brood and asked me if I would be willing to take one of them. The male kitten was BEAUTIFUL! He was white with patches of calico in him and as sweet as he was handsome. His sister, you ask? She was a pure calico, kind of scrappy looking and let’s just say not as personable as him. Unfortunately for me, one of the other employees had laid claim to the male kitty, I got the female and named her Aby.

﻿﻿﻿﻿﻿﻿﻿﻿﻿
﻿
Well, I brought Aby home to my brood which included my beautiful Mattie dog, an unbelievably sweet natured Border collie mix that wouldn’t hurt a flea, as well as several pet rats. Well, let’s say that Aby didn’t make a good first impression. In my naïve way, I introduced Aby and Mattie totally incorrectly and Aby went after Mattie like a bully in school yard brawl. My little girl didn’t know what to do. She yelped and ran for cover! I separated the two and continued to work on introducing them, but Aby would just never come around and each time, Mattie had to pay the price. After 2 weeks of this and being at the end of my rope, I had to have a heart to heart with Aby. She and I sat down on our enclosed back porch, where she was being confined when I wasn’t trying to get those two to adjust, and from the bottom of my heart, I let her know that Mattie dog was the Queen of the Household and if she couldn’t adjust, Aby would have to leave. I told her how much I wanted her to be a part of our home, but that it simply couldn’t be disrupted and that I wouldn’t let Mattie live in a home where she had to be fearful of being attacked constantly. With that, I gave her a hug, kiss and numerous rubs and went back into the house.


As God is my witness, that night I brought Aby back into our house ready to grab her up the second she went to make the move to attack Mattie and incredibly she slowly moved past my girl into the family room. From there, she jumped up onto the back of the couch, where she could have her back against the wall and sat there for several hours, her eyes never leaving Mattie who was curled up in a corner. My husband and I just looked at one another. The next night was the same thing and then, after several weeks of this, Aby was finally able to move inside the house where she has remained since with no further ambushes.


Now, did Aby and Mattie ever become best friends? Nah, far from it! Aby had always shown a tolerance of Mattie, but nothing more.  I was shocked about 8 years later when a neighbor’s dog had gotten off her leash and attacked my Mattie, who was outside on her own leash. She was yelping and crying hysterically. Before my brain could even process what was happening, Aby had opened our screened door, which, much to our dismay and constant battle with anything flying or creepy/crawly, she has mastered beautifully, and was on the back of the little Jack Russell clawing and biting forcing the dog to jump off Mattie to protect herself from Aby because by this time, Mollie, the Jack Russell had scratches and blood on her fur. Aby…she walked away without a scratch! Mattie, due to that thick coat of fur that I cursed out repeatedly while sweeping and vacuuming, had no wounds either. 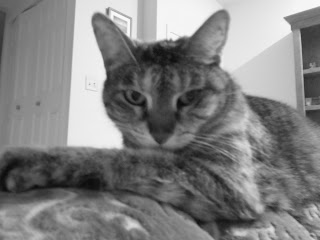 These days, my Queen kitty is a 13 year old senior girl, who is still pretty spry for her age and still intolerant of dogs, but I can tell she has definitely slowed down. We lost our Mattie dog in 2010 right after her 14th birthday, but she is always in my heart.