To celebrate Halloween and Kathleen's upcoming spooky release for ereaders, Ghosts of Lighthouse in Autumn 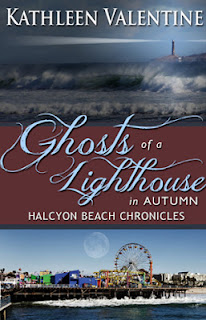 Kathleen has offered a PRINT VERSION of her dynamic (and one of my favorites!) novel DEPRAVED HEART to A Book and A Review for our readers! This rockin' novel has a rating of 4.71 on Goodreads. I like to call compare it to the good version of Dark Shadows. Ya' know the one from the 1970's? 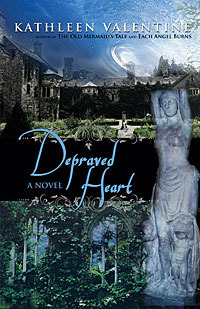 Growing up in Salem, Massachusetts, art curator Tempest Hobbs was surrounded by metaphysical practitioners but considers her own empathic powers a curse. The feelings that assault her became so terrible that she was confined to a psychiatric hospital. Upon her return home, badly shaken and weak, she discovers a letter from Hathor, the mysterious mansion of the Ravenscroft family.
Located on the island of Hephzibah Regrets just off the coast, Hathor is said to be filled with fabulous art and "fairy retreats" where lavish parties are held. But sixteen years ago, during one of those parties, the distinguished dancer and Ravenscroft heir, Raven Silver was shot and killed. His sister Rachel's husband Syd Jupiter, a powerful NFL fullback, was convicted of the depraved heart murder of his brother-in-law and sentenced to twenty-five years in prison.

The letter is from Syd Jupiter, now paroled and living at Hathor. Wyatt Ravenscroft is dead and has left his entire estate to Anjelica, Syd and Rachel's fifteen-year-old daughter. Syd offers Tempest the opportunity to live at Hathor for the summer while cataloging the vast art collection. She welcomes the chance to be away from the constant pressures of life in society.
Tempest is dazzled by the art she finds but is soon aware that there are secrets and lies all around her. Hathor's housekeeper, Audrey, hates Syd and was once, Tempest discovers, Raven's lover. Miles Wainwright, a local fisherman and the only witness to the murder, is hiding something, and Anjelica lives in fear that Syd will be sent back to prison. And then there is Syd's mother, Marie-Isobel, the owner of a Santeria shop in New Orleans' French Quarter, who joins them for the summer with her candles and cleansing rituals.

In the fishing village on Hephzibah Regrets the locals gather every night in the Riptide where men drink and talk fishing, women spin and knit, and everyone relishes the rumors about Hathor. They tell stories of Will Silver, the father Raven and Rachel never knew, and of wild Rosalind, their beautiful mother who died in an insane asylum. As the heat of summer intensifies Tempest discovers more about the secrets, deceptions, love affairs, madness, and mysterious deaths of Hathor's residents. And about Syd Jupiter who is as enigmatic as he is alluring.

Wanna win it??? Let me know in the comments section and you will be entered! Come back tomorrow and check out my review of Ghosts of a Lighthouse in Autumn and an interview with Kathleen Valentine....it is a good one!
Posted by A book and a review at 11:22 AM