A Death in the Lucky Holiday Hotel: Murder, Money, and an Epic Power Struggle in China by Pin Ho and Wenguang Huang 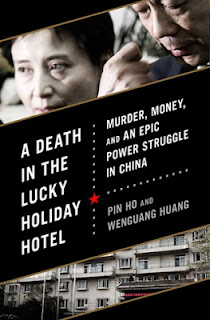 Book:A Death in the Lucky Holiday Hotel: Murder, Money, and An Epic Power Struggle in China

Synopsis: The authors give excellent insight into corruption, violations of human rights, among many other areas of the Chinese Communist Party, including leader, Bo Xaili. All of which culminated in the death of a wealthy English businessman, Neil Heywood,  and led to a shake-up so strong that it still rocks the party today.

My opinion: When this book first started off, I thought I would be reading a true crime novel. Instead what I got was a history of the Communist party in China. Then...it got really, really interesting! What the authors started to unravel was a deep-seated corruption and "misbehaving" abound. By the time they got to the murder, I was so deeply entrenched in the corruption of the Chinese Communist Party that I was like "Go back, Go back!" and the murder was almost an afterthought.

I found this a slower read for me because of trying to keep the names straight. As Americans might not be familiar with the Chinese Communist Party,  I almost felt it would have been helpful to have a cast of characters with a tree as to where they ranked in the party, as well as a timeline of key events.  In my opinion, it would have made the read go much quicker, as I could have referred back to it with questions.


Source: Netgalley for Public Affairs
Would I recommend? : Oh, yeah, especially if you are a political junkie like me. True crime, maybe not. There are too many politics to break down before even reaching the crime.