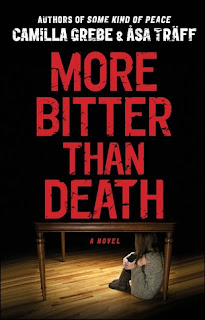 Synopsis: Five year old, Tilda witnesses her mother beat to death while she is hiding under the table. It is up to Siri to get into Tilda's mind, as she is the only witness to the horrific crime.  How does the crime fit into the domestic violence groups that she and her colleagues facilitate?

My opinion: I would say that this book was the weakest in the series. Most of Grebe's books have garnered at least 4 stars, but this one left me really cold. It was mystery light with more focus on the subject of domestic violence and the crime fit the agenda for the book, which is fine, but then it should be identified as that.  I was rather disappointed since her first book in the series, Some Kind of Peace, garnered 4 stars from me and I jumped on this title the second I saw it.


Source: Netgalley for Publisher
Would I recommend? : The only reason I would recommend this book is due to it being a part of a series.