Rage Against the Dying: A Thriller Becky Masterman 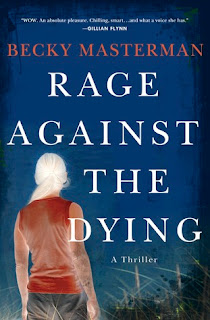 Book: Rage Against the Dying: A Thiller

Synopsis: Disgraced former FBI agent Brigid Quinn is retired and living in Tucson when she is brought back into service when an a serial killer whose case she had been confesses to the murder of another agent. Did he really do it or does he have ulterior motives and plans for Brigid Quinn?

My rating: 3.5 Stars (bumped up to 4 stars for Goodreads and Amazon)

My opinion: Gotta say when I first started to read this, I was HOOKED and it was a 5 star read EASILY. It reminded me of one of my favorite shows, THE FOLLOWING, with its twisted storyline and characters. I loved the crimes as they were presented more unusually than what is normally out there in your standard crime novel.  I was loving that a Goodreads reviewer said that it was a book not to read while eating and I felt the same way.

About half way through, the book really became mild in my eyes. The edginess softened and I found I could push the book aside. Still well written. I would still seek out more from this author. I couldn't see what some of the reviewers were saying regarding the "not eating while reading this book" I would call the later half much more of a psychological thriller.


Source:  Netgalley for St. Martin's Press
Would I recommend? : Yes