The Role of Destiny in the Trajectory of Dreams

THE ROLE OF DESTINY IN THE TRAJECTORY OF DREAMS

Destiny is a funny thing. When you’re a kid, you worry about becoming your mother or that adult figure who seems to have no fun at all. But are you fated to become that person?
Lela White, the main character in my novel The Trajectory of Dreams, is concerned about fate. It’s not that she believes she’ll become her mother—it’s more that she believes her life’s mission is about righting a wrong her mother committed when Lela was a child. That’s a pretty heavy load to carry, especially when that wrong involves sending a crew of astronauts to their deaths aboard the space shuttle. Destiny becomes more than maybe adopting your grandmother’s weird habit of washing out and reusing Ziploc bags and more about not becoming a murderer.

As you might imagine, Trajectory is a novel that involves mentally ill characters. Lela’s mental disorder contributes to her belief that if she breaks into the homes of astronauts to watch them sleep, she can keep the revitalized shuttle program safe. Her mother—now missing—had her own mental problems. The role of destiny looms large in the novel, and I found myself thinking a lot about how we acquire the strange peccadilloes of our parents. In the case of the White family, there’s a certain level of dysfunction at play along with issues of fate.

Playing with dysfunction and fate is a lot of fun—as long as it isn’t your dysfunction and obsession with who you’re destined to be! I admit that in the writing of The Trajectory of Dreams and wrestling with Lela White’s character, I was reminded of the movie Mommie Dearest. You’ve seen it, right? Joan Crawford and her adopted daughter, the way they come to loggerheads and all that. Was Christina destined to become Joan? Or is she the anti-Joan? Are you your mother or your grandmother or your favorite aunt . . . or did you become the exact opposite? Like I said, destiny is a funny thing, and life works in mysterious ways.


It may be your destiny today to win some stuff! On this stop of the tour for THE TRAJECTORY OF DREAMS, you can win a signed copy of the novel and a good luck keyring. Leave a comment below about your favorite weird parental habit for a chance to win!

Publishers Weekly calls THE TRAJECTORY OF DREAMS (Bitingduck Press, ISBN 9781938463440) a "skillful mainstream examination of a psychotic woman’s final descent into insanity." The novel exposes the chaotic inner life of Lela White, a sleep lab technician and mentally ill insomniac who believes she has been tasked with protecting the safety of the revitalized U.S. space shuttle program. She breaks into the homes of astronauts to watch them sleep, and she is prepared to kill to keep those with sleep problems from the shuttle launch. Her delicate grasp on reality becomes more tenuous when annoying co-worker Trina Shook insists on moving into her house and visiting Russian cosmonaut Zory Korchagin inserts himself into Lela's life. Korchagin's increasing interest puts her carefully-constructed world at risk of an explosion as surely as he does his own upcoming launch. Lela's tragic childhood unfolds throughout the novel, revealing the beginnings of her illness and long-buried secrets, and as Lela’s universe unravels, no one is safe. Buy a copy of THE TRAJECTORY OF DREAMS at your local independent bookshop, Amazon, Barnes & Noble, or anywhere books are sold. 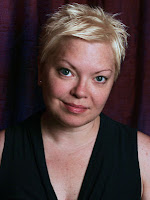 THE AUTHOR: Nicole Wolverton fears many things, chief amongst them that something lurks in the dark. From ghosts to stalkers, her adult and young adult fiction plays on the mundane and not-so-mundane things that frighten us all. THE TRAJECTORY OF DREAMS is her debut novel. She is a freelance writer and editor and lives in the Philadelphia area with her husband, dog, and two cats.

MORE STOPS ON THE BOOK TOUR FOR THE TRAJECTORY OF DREAMS=MORE CHANCES TO WIN!