THE RACHEL, a tini and a Book!

As a newbie into the world of Indie publishing and taking tried and true efforts in the business development world and twisting and contorting them to fit into an Indie business perspective, I have come across a couple of people who are so wonderful, dynamic and giving that they have introduced me to a couple of other people. IT IS CALLED NETWORKING, PEOPLE! Any who, one of those people was Terri Guiliano Long, author of “In Leah’s Wake” and the soon to be released “Nowhere to Run”. Terri has been such a wonderful support and introduced me to so many wonderful people that there are not enough ways to thank her for everything that she has done.

One of the people Terri introduced me to was Rachel Thompson, owner Badredhead Media and several social media/advertising companies, as well as the author of two Amazon bestselling novels, The Mancode: Exposed and A Walk in the Snark.  When Terri put out the call to follow this Twitter newbie to help me build up my following, Rachel came to the call. When she first followed me on Twitter, I went in and read her background and was blown away by our similarities, by our healthcare sales backgrounds and our personalities. But a couple of things that really stood out to me was her fun, politically incorrect, shining personality that has some snarkiness attached!  Oh, and one of the biggest things was her love of Tinis!

Now, I have a gift, not sure if it is actually a curse, in which recipes, both food and drink, will pop into my head. I can be lying in bed, driving down the road, watching tv and all of a sudden a concoction will come together.  Anyway, I was working on a post that I was doing which showcased Rachel’s business acumen and I had to think about her personality traits. All of a sudden, I started thinking of alcohols which go with those traits and voila THE RACHEL was born. Rachel can consider herself among such writing greats as Oscar Wilde, Ernest Hemingway, Jack Kerouac all of whom have drinks named after them! May she become as famous as her predecessors named above! 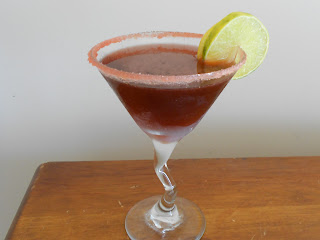 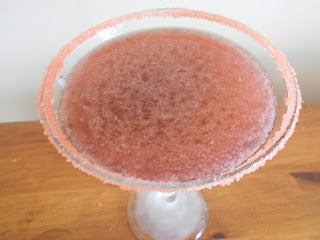 Look at that ice. Now, that is cold, baby!

Make sure your bar ware is chilled!! Here we go!:
Ingredients:
1/2 lime juiced into the shaker (Fresh lime...NO CONCENTRATE! (i.e. the real thing..not fake!)
1.5 oz Citrus Vodka (She is from a citrus state, after all!)
1.5 oz Cake Vodka (Who doesn't like cake?)
.75 oz Razzmatazz Schnapps (for her dazzling personality)
1 oz Pomegranate Liqueur (a bold, yet approachable liqueur)
Pomegranate, Lemon Drop or Cosmo Rimmer

2) Place all liquid ingredients in an ice filled METAL shaker and shake for no less than 60 seconds.

A Walk in the Snark : Rachel's essays on life in OC, CA as a real, in multiple perspectives, redhead in a sea of fake blonds, fake boobs and extravagance at every turn. Told with Rachel's trademark snarky humor, she isn't afraid to tell it the way it is.

The Mancode Exposed I reviewed this hilarious, yet dead on novel about the unfairer sex for a recent promotion that Terri and Rachel were doing for the Dog Days of Summer! A Book and A Review's thoughts on The Mancode: Exposed!


So, go grab the books on Amazon, kick back with The Rachel and enjoy the snark!


Be sure to pop in next Monday for another Rachel "inspired" drink...
THE ULTIMATE NUTELLA MARTINI